Wool That Is Worth It

Long periods of silence broken intermittently by rushed but affectionate updates -- it's almost as if  I'm a mum with busy teens.

Guess what?? I have a new job, working for my amazing sister at her new yarn studio! My job description includes advising on yarn line purchases, planning and assembling kits, keeping tabs on the design world, and helping people with their knitting crises. I've moved to contract teaching, too, which is both EXCITING and WEIRD. (And I've had to learn Instagram which freaks me out.)

The shop is really fun and also scary, so far. We've been in business less than three months, but it's been a steep learning curve, and also so touching to hear people's very lovely feedback. The concept seems to resonate with people -- our tagline is "Carefully Curated Yarns"...it's a nice thought, but when you really mean it, as we do, you find it's awfully time-consuming to have high standards! One very important part of that is never, never violating copyright. It was one of the foundations of our business model --- we have seen yarn stores do this a lot, and we hate that designers everywhere get cheated of their profit and their creative rights this way. It's a little hard -- designers often don't respond to requests for permission to buy their patterns for inclusion in kits, for example, even if we are not asking for wholesale prices. But this aspect of the business matters to us and we're dedicated to keeping it up. 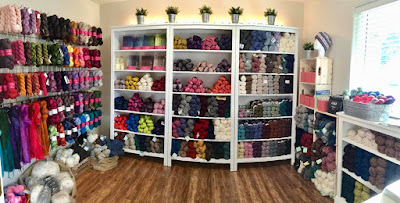 We're proud of what we've done. We've assembled a small but very pleasing collection of yarn, and we're slowly and carefully growing our collection. We're starting a knit group at a local Community Arts venue next week, and are looking forward to our first Christmas in business.

I think not many of my good old readers are still out there...the day of the blog is over, I know. But I wanted to share this with you, since I know you're all still knitting, and maybe you remember me as well as I remember you!

You'll know the depth of my commitment not to leave the house this past weekend, when I tell you that on Friday evening I washed BOTH my outside bras and hung them to dry. By 'outside' I mean they are decent enough, performance-wise, to wear out of the house. I do have a third one (bra, that is), but it's missing one underwire therefore gives me a charmingly - but alarmingly - lopsided appearance. 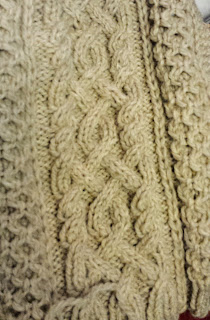 Nature conspired with me by dropping a foot or so of snow, rendering my street impassable. Then my daughter got sick and I began to wish I hadn't washed my bras and that the skies had remained sunny.

I made a lemon loaf and then ate it. No pictures.


I made a few of these cute crocheted, zippered accessory bags, too - lots of hand finishing, quite a bore. The plan is to sell them and finance the lavish lifestyle to which I'd like to become accustomed. 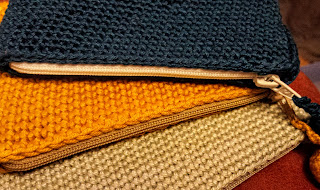 I've got 9 done so far, which means I have to charge approximately $100,000 each. Perceived value is everything, though - I don't anticipate any problems.

Strait in a Storm 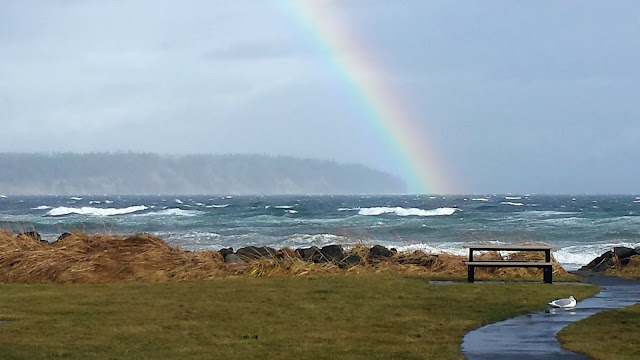 It's been stormy the last several days - today was a real sou'ester with the infamous Pacific coast sideways rain. But the ocean was pretty and this seagull was just chilling on the seawalk, thinking about seagully things.

I believe I managed to underwhelm even myself last year, posting only a handful of times and not a word from March until now.

2016 was interesting for the whole world, more's the pity. In my little corner, the most interesting event was a relocation - my sister moved from Calgary back to our hometown. For years we've been dreaming of the day when we could be close enough to pop in without airline tickets, and all of a sudden, with almost no warning, it happened. She's here.

There was another big change in September when my oldest daughter started half-time at the local high school. She's in grade ten...unthinkable. So we're doing a mashup of homeschooling and public schooling; basically she's collecting her Sciences there, and her Arts and electives here. She's thriving in this new environment and doing very, very well both academically and emotionally. I'm getting ready to miss her, oh, so much. Just a few more years...

And the young one, twelve and a born artist. She is always working with miniatures, sketching, painting, decorating, hot glueing, dancing, singing, doodling, thinking, and dreaming. It's not easy to homeschool her...she's not a kid who can read a book and then fill out a worksheet. She challenges me all the time and makes me think on my feet. (Sometimes I don't do so well.)

Christmas was wonderful - a nice rest. I always take the full 12 days, December 25 to January 6, and this year I stretched it out to 14...I just took the tree out yesterday. It's still in great shape; I have to hand it to Home Depot because their Noble firs seem to last awfully well. I think I put the tree up on December 11 this year, which means it was in the house nearly a month and it still looks wonderful. Hardly any needle drop, and whenever I snap off a twig and try to light it on fire, it fizzles out.

I hope there will be more to come, soon. I had my ten-year blog anniversary last September and didn't even notice...in 2017 I would like to get back to a bit of a slower pace, and blogging definitely feels slower after years of Facebook and Pinterest.
Posted by Shan at 12:01 p.m. 2 comments: Links to this post

But You Did Not Come Back

This small memoir - almost a booklet - stood on my shelf for a few weeks after I received it. The first day, I had scanned the opening page, but then I closed it and set it down.

It was too important to rush through, and I had a busy couple of weeks ahead of me, so this morning I picked it up again.

Marceline Loridan-Ivens hadn't "self-identified" as a Jew, but that didn't matter: she was deported with her father to Auschwitz-Birkenau as a young girl. All the familiar unspeakable horrors unfolded there, and from the first line, my eyes were hesitant to move down the page. I always have the feeling, when reading books like this or when watching movies about the Holocaust, that I'd rather not hear it all again but that I owe it to Germany's victims. And Russia's, and China's, and Uganda's, and Yugoslavia's. Syria's. The world's. My discomfort, my revulsion and my tears, are the very least of the tributes I can offer.

Marceline's father on the men's side managed, somehow, to pass a letter to her on the women's side. The letter contained, Marceline knows (she is sure), his urgent message of hope for their future life, and an exhortation to her, to survive.

Seventy years have passed since Marceline left Auschwitz, then left Bergen-Belsen, and marched through Czechoslovakia to a repatriation camp. She rejoined what remained of her family, and has carried Auschwitz-Birkenau with her, through all the mess and tragedy, up until 2016.

She lives in Paris. She sees the hatred that still burns against the Jews throughout the world. After decades of work as a documentary film-maker, she sees the failure of any system, of any nation, to establish either unity or peace.

Nearing the end of her life, she has written this memoir as if it's an ultimatum to us, to humans. All the terrifying events of her time in the camp, her time afterward - if there can be an afterward - and what she sees happening now...all these things unfold in bare, stark prose over only 99 pages.

I didn't cry a single tear during those 99 pages. It was all just too horrible, too full of despair, too unthinkable.

On page 100, there is a single sentence. That sentence, written so recently the ink is barely dry, caved me on myself and made me weep. I won't tell you why.

Read "But You Did Not Come Back".

An interesting Christmas, this year -- my once-weekly job evolved into a bit more than intended and on top of extra classes to teach, as Thursday is my usual timeslot in the yarn shop, I had the unpleasant novelty of working Christmas Eve.

Everything turned out well, though, and we had a very merry Christmas day. My daughters cobbled together their money and bought me an impressively large gift card for Kobo, so I did some Boxing Day shopping and am now neck-deep in "Major Pettigrew's Last Stand", which I'm finding both enormously touching and killingly funny.

The Major found much to admire in America but also felt that the nation was still in its infancy, its birth predating Queen Victoria's reign by a mere sixty years or so. Generous to a fault -- he still remembered the tins of chocolate powder and waxy crayons handed out in his school even several years after the war -- America wielded her huge power in the world with a brash confidence that reminded him of a toddler who has got hold of a hammer.

It's full of wry, quotable sentences filched from the musings of its title character, whom I very much wish I could meet in real life, but am keenly aware that I wouldn't measure up to his notions of good manners.

Today I have the rare pleasure of being home alone. My husband has taken the kids to Nanaimo to shop, giving me a good few hours of lounging on the sofa with a chocolate in one hand and my e-reader in the other. I even have my glasses off, a technique I've developed in order to stay relaxed in a living room slightly too messy for true comfort.

My warmest, albeit late, wishes to you for a Merry Christmas. Don't forget -- we're only on the third day of twelve, so keep the Yuletide spirit going with a well-placed glass of champagne, some seasonal music, and pajamas at all hours.

Piper's been gone a month....it's so surreal strange weird sad. I miss him a lot.

One day I received a letter from the vet, in a card of condolence. She wrote,

Wow, that was a tough one.

But we have a saying, "Better a few weeks early than one minute too late", and I think that applies to your situation with Piper.

I'm grateful for her words -- not that I wasn't sure we were doing the right thing, but it was a relief to hear her say it.

And now, of course, I'm terribly sick and have been in bed for three days. The stress got to me.

I've been throwing back gallons of my magic potion and it's making me feel loads better. I've been knitting a lot, too, which is marvellously buoyant to the spirits.

Maybe I'll take some photos and put up a new post next week. Wonders, they never cease.