I wish it fit me. 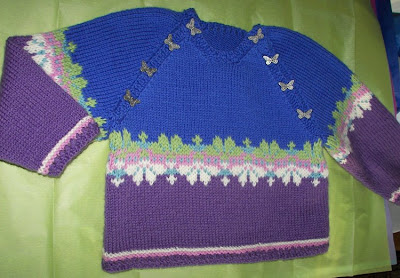 Pattern: Fiona Ellis, Inspired Fair Isle Knits, Potter Craft 2007
Size: 2 years
Cast on: August 2, 2008
Bound off: August 21, 2008
Tension: 22 sts, 28 rows in stockinette
Needle: 4.0mm and 4.5mm Clover Takumi bamboo circular
Yarn:
SandnesGarn Smart, 100% pure new wool, 50g (100m)
5226 (A - Plum, 2 balls)
1012 (B - White, 1 ball)
7033 (C - Aqua, 1 ball)
4715 (D - Pink, 1 ball)
8615 (E - Lime, 1 ball)
SandnesGarn Lanett Superwash 100% merino wool. 50g (195m) #5836 (F - Blue, 3 balls, held double throughout)
Yarn Source: Needle & Arts Centre
Yarn Cost: around $60
Modifications: None (ETA: forgot that I did change something. The instructions for the front neck band call for picking up 46 stitches - that works out to more than the number of stitches/rows. I knit the neck band as directed and it was way too long. It was wavy, wouldn't lie flat, and distorted the neck edge. I ripped it out and tried picking up 36 stitches instead - it worked much better. I also decreased after the eyelet row on the front neck, one stitch on each side of the centre 6 stitches, to help it lie flat. This worked beautifully.
Notes:
1) There is an error in the chart, on row 9. The last 7 stitches should be k3 in colour E, k4 colour A. Chart has k7 colour A with no symbol.
2) I don't like that the fair isle band is worked flat. It would have been just as easy to work the sweater in the round to the armholes, then divide - that would have made the FI band so much easier, and the finishing so much neater.
3) I LOVE this sweater. I wish I could make one for my daughter but I have a feeling it wouldn't look as cute in a gigantic size like a 7 year old, or a 4 year old, would need. I think I have enough yarn scraps to make a hat, though, so I'll get my final Drifting fix that way.

All right, on to the photos. 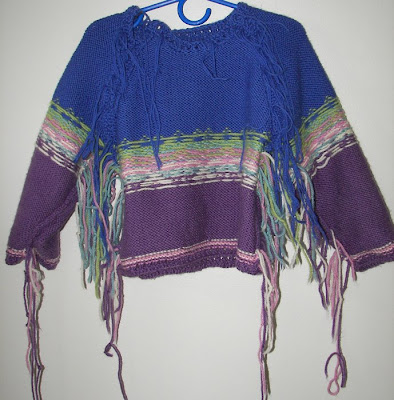 This first one is to show you how many ends you are looking at weaving in, if you knit this sweater (I'm talking to you, Kristine). It took me two and a half days of weaving - not steadily, but whenever I had a chance. I am careful with ends, and these are superwash, of course, so you do have to run them in pretty thoroughly as they won't felt in by themselves. It was okay though: I just queued up about 15 episodes of Cast On and let my butt mould into the shape of the corner of the couch. When there are this many ends, you have to be careful, too, to not run them all into the seam at the same place...you don't want the seam too thick.

See? Seamy goodness. (The side seam shot is kind of a trademark of mine.) 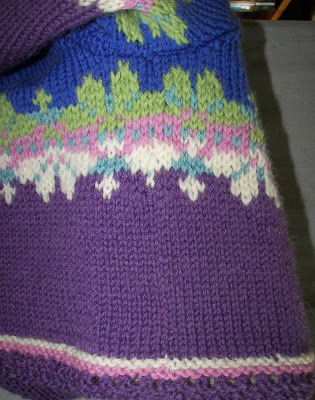 On this sweater the left side button band opens, but the right side button band does not. You're supposed to just sew the buttons right through both layers, but to make sure Ruby's grownups aren't confused by the mysteriously "stuck" buttonholes, I also whip-stitched the right hand button band closed, so it would stay purty. Didn't get a very good picture of it, though. 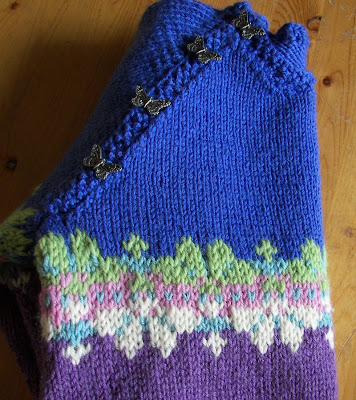 Here you can see the left-hand button band as well - the one that opens. 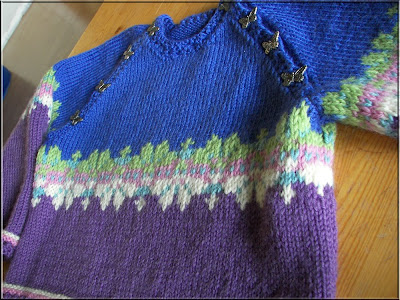 I love the feel of this sweater - the weight of the finished fabric. It's very heavy and warm, but so soft and pleasantly drapey. The two different wools do feel different - the purple on the bottom is "new wool", a bit scratchy, and the blue is merino. Divinely soft. I suspect that the blue may pill up a little bit, but the purple should be good for a long while. 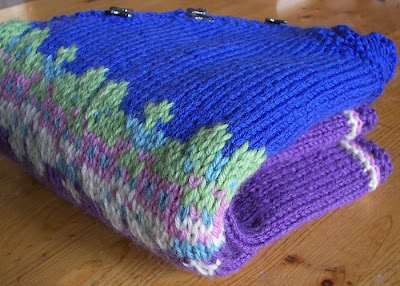 And it's time to pack this up for its trip back east...of course I am a gigantic geek so I have wrapped the sweater in five colours of tissue, matching the yarn colours.

Yes, I know. Go ahead and laugh. It would have been six but I can't find the purple. 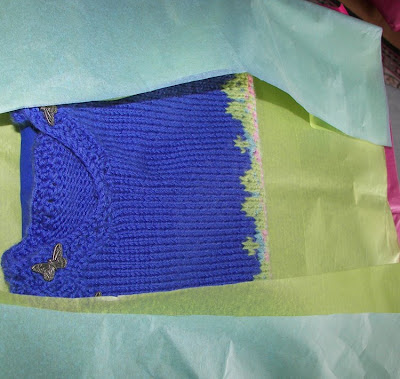 I would knit this beautiful sweater again in a heartbeat. It was fun, very quick, and so satisfying to see all those vivid colours together. I think it's going to be so lovely on little Ruby, who has dark hair and eyes.

Joe and Dave, I hope you like Drifting. And I'd love to see some pictures of it on Ruby, after her birthday. Thanks for commissioning me to do this - it was an absolute pleasure.

Woah. That's a lot of ends. Well worth it, though, because the finished product is fantastic!

Actually, I want one too... but you know, enough yarn to cover my generous paunch costs slightly more than the GDP of a moderately wealthy country.

Love the shot of all the ends. Your seaming is a thing of wonder.

Well, my, oh, my, haven't you outdone yourself!! We are both thrilled at the end result and can't wait to give it to the girl. We'll make sure she models it and we'll send you the pictures. You'll want some kind of memento. Thanks again!

It's so lovely - what a lucky little girl.

Oh god it's glorious. And it might fit me.

I love it! Maybe you can share the pictures from Dave and Joe so we can all see how adorable Ruby looks in this!

Yes, what they said.

That picture of all the ends made me a little queasy, though.

HA! Not only am I contemplating knitting this beautiful thing, I'm seriously considering knitting it in Dale ULL, which would necessitate knitting it doubled, all the way through. And then I would also convert it, to be a top-down raglan, because so far, Lucy needs a lot more length than she does width, and I'd get more wear out of the sweater by being able to add to the length.

Apparently, being a mom of an 8 month old with a full time job, an apartment, and a fiance, while planning a wedding, isn't enough for me.

Next time I lament the fact that I never have time to read/do yoga/watch Buffy, smack me, okay?

It looks beautiful Shan. I think you're right about it not working in a larger size. Sometimes things look completely different on little 'uns.

Kristine, anything that doesn't allow you time to watch Buffy is bad.

Ox, the sight of a generous paunch tastefully swathed in fair isle knitting would be splendidly worth it.

As for a larger version, why not take the fair isle band and move it up some? Instead of the top of the FI band touching the underarm, the bottom of the FI would sit on the underarm. You could knit it from the top down, as a regular raglan, since older kids/adults don't need the buttons to accommodate a toddler's noggin. It would take a little chart magic (well, maybe more than a little) to put the raglan decreases into the pattern, but it would be so very, very pretty. Maybe just folding a mitered corner into a paper copy of the chart would show you how to figure it out . . .

Wow, that is absolutely gorgeous!

i think it is lovely and i adore the wrapping. geek or nnot. i love such little things although i am awful at it. and i think it would be great on a 4 year old too. after all aren't they still quite small. and you are one good seamstress. i love beautiful finishing.

I think I had a physical reaction to all those ends! But it certainly appears worth it--you did a great job on the sweater! I just seamed up my first garment (yeah, someday I'll get pictures to post) and had that same thought of photographing the seam...I was proud of myself! Mattress stitch is magical!

That's a gorgeous sweater, but what a lot of ends to sew in!

That is one beautiful (BEAUTIFUL) work of art... though you almost scared me outa my wits with the picture of the ends to be woven..... ;)

Congratulations on a job well done! It is a beautiful sweater I am glad I got to see it and you last week!

Your travel mug is at Steph's.