Souvenirs from the gate of heaven 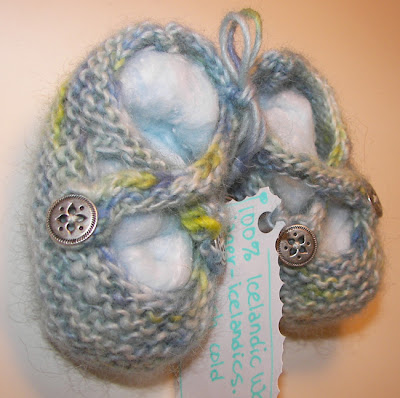 Pattern: Saartje's Booties
Yarn: Jager Icelandics Single-ply Sport
Yarn Source: a gift from lovely Lizbon, who bought it at Rhinebeck.
Needle: 3mm bamboo double-points
Finished size: 3" long. (Newborn to about 4 months?)
Cast on: March 16, 2008
Bound off: March 17, 2008
Buttons sewn on: March 24, 2008
Notes:
I made three of these because all babies kick off their booties, but the third one was inexplicably larger than the others until my daughter said "I like dose baby shoes mummy. I twied one on but it was too snall for me." I'm including it anyway.

I tacked down one strap on each of the booties so that the mother wouldn't have to button them both every time.

This pattern was cute - nice and easy. They barely take any yarn, too, so overall they are a definite thumbs up, but getting the button placement right can be tricky. They also look better stuffed, so I filled them up with a bunch of blue cotton balls.

I think the baby's mother will have to put some cotton socks on underneath the booties, as they are a bit scratchy.

There's something so whimsical about booties. I think they've faded a bit from popularity in the last few decades, replaced by socks and little sneakers, or little leather footlets with elastic at the top. But there's a charm about making and receiving them - with their amazing tininess and their rounded edges and their plump looking toes. They just seem so suitable for little teeny babies with their warm, soft, untrodden soles.

Those are adorable, Shan. And I love the lullaby. Thanks for including the original lyrics; it's always nice to be able to read it untranslated.

I'm thinking it's time for some knitting content over at TPM. Well, once I can steal Vern's camera back. I'll have to run a sting operation tonight while he's at scouts . . .

Those are so cute. They make me want to squeal and pinch little baby cheeks.

Obviously different, but have you seen the Amy March slippers on Ravelry? I just favorited them...like grown up booties.

I LOVE the Amy March slippers. Thanks Bethro!

Thanks Annalea - I bought a CD about 6 years ago called "Globalullabies" by Freyda Epstein, and this lullaby was on it. The tune is beautiful. You can listen to it here.

Those booties look angelic indeed. Love the lullaby; I guess living in secluded mountains is conducive to poetical thinking.

I was worried about the slight scratchiness of that yarn...But the colorway was too amazing, and I couldn't pass it up. Funny, 'cause I saw it in the first five minutes, thought I ought to look around first, looked around, realized it was perfect, then had to try and retrace my steps to that booth.

They are beautiful! I bought that CD as part of Baby's shower gift, in fact. Nice post, Shan.

Hey, if I ever get pregnant again will you make my baby a pair of booties like those. Those are so very adorable.

Those booties are great, aren't they? a quick knit and guaranteed to please. very nice!