There seems to be a misconception that when I said "I wouldn't want my stash to end up at the Thrift Store" I meant "I'm going to give you guys my yarn." In reality I meant "I need to get to the knitting and use up my yarn."


But of course now I feel bad and will probably have some kind of yarn giveaway to buy your affection again.


I have been working on something though, despite all appearances to the contrary. Remember when I said I was going to knock off Eunny's Macho Aran? Well, when I started examining the knit, I realized that there's no such thing as knocking off when it's a traditional Aran sweater. The ropes, cables, braids, what-have-you are all more or less in the public domain. It's just a matter of deciding which ones you want, swatching the panels, putting them together handsomely, and doing a bit of math.

So I just did that, instead. 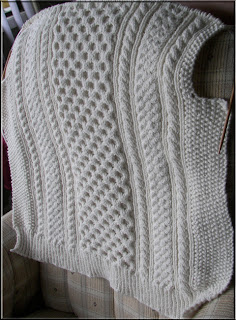 I changed my mind on the needed size, after having knit 6 or 7 inches of sweater. I needed more width, so I ripped it back and added another rope cable to the outside of the 12 stitch plait. See? Old sweater (sorry about the crappy picture. Arrows indicate where I later added more ropes): 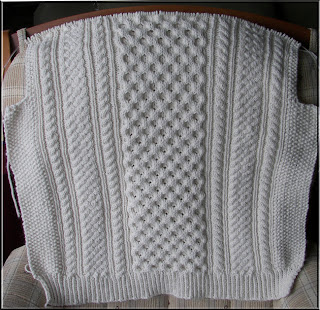 I like it better with the extra rope. Not only is it wider, it's more visually balanced.

For the actual cables, I consulted Cables Untangled. None of the charts are complicated, so I haven't had to photocopy or even write down a pattern, which makes this project just about as portable as a sock.


As the sweater started to take shape I noticed that all the motifs had fairly short repeats (the longest, honeycomb, is 8 rows) resulting in a dense fabric with a small-scale appearance. This wouldn't be my choice all the time, but for this particular sweater it's perfect. Because when complete, this sucker will be under the Christmas tree of a very, very cold person.


The yarn is Classic Al, by Elsebeth Lavold. It's a 50% merino, 50% alpaca worsted weight. This yarn is completely dreamy. I'm not a fan of Elsebeth Lavold's charts (or maybe, I'm not a fan of her pattern editor? test-knitter? someone.) but I have to admit she doesn't make mistakes when it comes to fibre choices and spinning. I've used her Silky Wool and her Silky Tweed, and now the Classic Al. All three are gorgeous, quality yarns.


(And hey - if you feel like trying it out, Webs has it on clearance for $3.49 a ball US!! That's, like, $3.30 a ball Canadian. Which means you can get an entire sweater for about $80, shipping to Canada included, with leftover yarn afterwards. Woot!)


And I realized I forgot to post a picture of Candy&Costume Day. For the first time I just went with the Princess thing. My daughter was shocked and pathetically grateful to be allowed to dress up as a Princess, complete with curling-iron ringlets and actual.....real.....makeup.


"I love you too sweetie. And remember: you are strong, you are beautiful with-or-without-a-dress, you are clever, and anything he can do, you can do better. Including saving yourself from towers, dragons, and evil queens. You don't need a man to complete you and you certainly won't be waiting around for some lame Prince to come schmaltzing up on his stupid pony, magnanimously agreeing to kiss you and somehow magically make your life complete just by condescending to "fall in love" with you."


"Yes Mummy." [Absently, while stroking her ringlets with glazed eyes.] 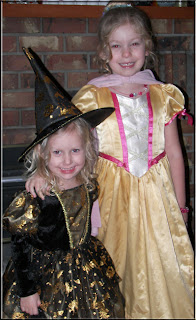 And just think what a fullfilled and self actualized person Snow White would have been if she was told that! Whole diffrent ending..... I love that honeycomb stitch there. Looks so tight and clean!

I can just see you saying that, too!
I wasn't expecting stash, I just wanted to hear about it!! :)
Sweater looks loverly.

Oh! What gorgeous children! What a gorgeous sweater!

Please tell me you did not make those costumes. Or, my kids will be saying, "Gee, Mom, Auntie must really love her children."

Ames, I made the princess, but not the witch. Is that okay?

Hey, both of our girlies were witches for hallowe'en. You have two very beautiful girls and two talented hands to knit so fabulously.

Love the sweater, and even more love the little speech to Princess.

Shan, yes, that is better.

And, the sweater is amazing, of course. I guess you are getting tired of us all singing the praise of your fiber prowess.

OMG! And I was just saying how cold I am and how the heats not on yet! It's an amazing sweater - thank you, thank you!!!

You mean it's not for me.

Can I have some of your yarn then?

I'm with you on the princess thing - it grates on my nerves. Two Halloweens ago Willow was the only girl in her class dressed up as a princess (she was a scary witch).

Lovely costumes. I had a princess this year also - sigh. Love your sweater!!! How in the world do you get so much done??? You are amazing!

On the princess thing ... we have two grade 2 classes at our school. In the other class all the girls were princesses and fairies and angels -- all light and sparkly. In our class the girls were all witches or scary things (except for one flower and one fairy). Totally cracked us moms up!!

Love the speech, Shan. It's so funny how girls are girls no matter what. :) I have two much larger princesses at home, and they haven't changed a bit. Love the sweater, too! I haven't knit a thing since I finished the blanket for Laura's hope chest. That was a while ago. Too busy keeping these fingers writing now. :)

I just wanted to tell you I'm working on the Eulogy. I've been doing NaNoWriMo, so I haven't had time for much else, but I want to do it. I'm about halfway through it and it's giving me some incredible insight into my psyche. Love this exercise! I'll let you know when it's posted. Thanks for the comment on my site. :)

The aran is gorgeous, I can almost feel the texture!

Great speech to your girl, I'm sure she hears it on some level even if her eyes glazed over :)

The sweater looks beautiful.
Your girls are too adorable!
I've finally posted the meme.