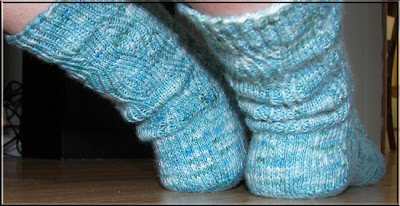 Pattern: Kate Gilbert's
Yarn: 100g Sweet Georgia Superwash Sock in "Life Aquatic"
Yarn Source: Pick Up Sticks
Needles: 2, 2.25mm Aero aluminum circulars
Tension: 9.5 sts/inch
Cast On: July 14, 2007
Bound Off: July 28, 2007
Mods: Used a slip-stitch heel instead of the eye of partridge specified, by accident. Designer recommends 3 repeats of the pattern on the cuff and I only had enough yarn for 2.
Notes: I liked this pattern. It was pleasantly addictive, and easy to memorize. I like how it looks and I'll certainly make it again.

And now let's review, shall we? 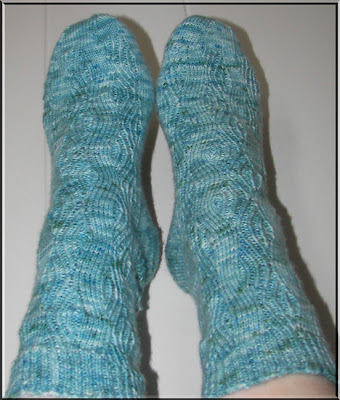 They are stunningly beautiful. Include the saga of the socks for your pal, perhaps? They will make the socks that much more precious.

Who took the first pic? The cat?

Wonderful socks. I agree, send the story, too.

That was painful to read.

The socks look great, that is, if they survived the plane crash.

Gorgeous! And I like the new look. Miss you. Rellies keeping us BUSY!

Well, they are glorious. Let's hope they have a long and happy life in Denmark. Perhaps the Sockapalooza curse is limited to Canadian soil?

There is no cat. Don't you know an art shot when you see one? Yeah, I know I'm no Alexis Xenakis.

Thank you, I did do a lot of improvements on the ol' blog today...in lieu of housework. I didn't even know until today that I could put pics behind the header so I spent two solid hours cropping and resizing bits of all my photos. Fun but eye-bugging.

Note to self: Do not fly to Denmark in the next week. The odds are not in your favor. :)
The socks look great, in spite of the hurdles you had to get over.

Sheesh...with that kind of history, I would definately have included a huge package of lifesavers... just in case...after all it would be a shame to lose a beautiful pair of socks to murky salt water... but of course the sharks would probably still get 'em!

After that painful saga I hate to think of anything else that might go wrong. But here's what happened to me the last time I used padded envelopes to send out yarn packages: two of them arrived open, and one was missing some of its goodies.
Here's to life savers and duct tape.

Rats! I'm not in Denmark, they must not be for me! I love the socks, and I'm sure that your sockpal will appreciate your tenacity. My plan in the event of one (not multiple) problem was to use a pair of already knit (though never worn) socks that I'm saving for winter.

It wasn't a comment on your photography. It just struck me that the photo would be at a cat's eye level. :)

The socks are beautiful. You've done well, again. Think I might have to take part in the next one, when is happening?

I think Sockapalooza is a yearly thing. The woman who runs it blogs at www.alison.knitsmiths.us


And you're right Anita: pic one is a very feline perspective.

You forgot the part where the baggage handlers try on the sock and eat the chocolate.Oh, and be very very glad you are not Alexis Xenakis, Trust me on this one. I know....

Okay, Shanpalooza, how did you take that photo? I have been pondering 'til my puzzler is sore.

Hey Ames, I'm bettin' she used the timer. Either that or she's even more flexible than I thought!!
But now you have me wanting to call her Shanpalooza, which all things considered she might throw something at me for.

Shanpalooza is pretty amazing and talented, but, I agree, even she is not that flexible. You might be right on the timer bit, for I cannot imagine Mr. HSB crawling under a chair to take that picture for her.

What an ordeal! Thanks for the nice comment on my socks -- I just clicked over to take a look at yours, and happened to be eating cherries that look almost exactly like your header. Yum.

Now Ames, that is a funny image.....goes off chuckling quietly ....

Yes my dears, I did take that picture myself, with no timer. Just sat on the floor with my feet down, put the camera down next to my hip, pointing toward my heels, and clicked away. Got it first try, too.

Beautiful and talented, too. All hail Shanpalooza!

Wow!!! I'm glowing of happiness here where I'm sitting in Greenland! I've just seen your comments, so no, you did not ruin it all for you, because I have been quite out of reach until now... and now I'm just anxious to get home to them! I already love them!!!!
Karen

... only more fun to know the full and painful history of the socks ;)